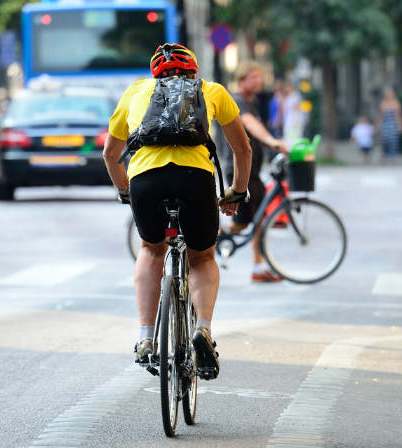 A 61 year-old executive who was an avid bicyclist was referred to physical therapy with a 20-year history of lower back pain that until recently he had managed despite a vigorous work, travel and exercise schedule. Not long before beginning physical therapy he started experiencing pain radiating down the back of his right leg and had all but ceased sitting at all let alone riding his bicycle. Before coming to physical therapy he had 4 surgical consultations with 4 recommendations to have surgery for a large herniated (extruded) disc seen on MRI.

Despite the diagnosis of herniated lumbar disc, our patient was found to have his primary limitations in hip range of motion especially on his right along with compensatory motions (substitutions of lumbar spine movement and hip joint hypermobility) and weakness in his left leg using the Movement System Balance assessment (developed by Shirley Sahrmann from Washington University in St. Louis). This patient’s treatment included instruction in proper body mechanics, supportive taping or bracing and exercises to help him learn to use his muscles properly and to move using the muscles precisely around his hips instead of using compensations of motion in his lower back and hip joint.

This patient came once per week for 6 visits, then every other week for another 6 visits and then once per month for another 4 visits. He was a diligent patient and he not only avoided surgery but he was back to working his vigorous schedule, traveling and bicycling and never needed the surgery he was recommended to have.

“I didn’t realize how effective physical therapy could be until I was treated by Amy. I had tried physical therapy with other therapists, and it had been completely ineffective. Amy took the time to figure out why I had pain, and provided a set of easy to do exercises that made a big difference in my pain level.

I’ve referred a lot of other people to Amy, and they’ve all had similar experiences. It’s great to know there’s someone to help those of us with unusual backs.”